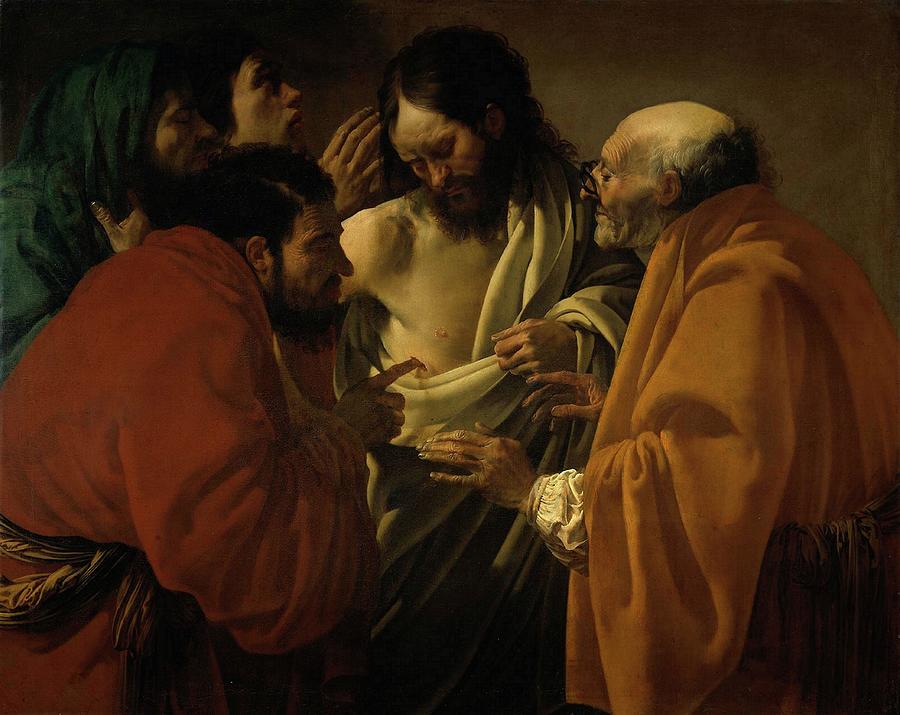 A reproduction of the masterpiece by Hendrick ter Brugghen, “Doubting Thomas” of about 1622. This work exemplifies Ter Brugghen’s preference for half-length figures as well as his love of the contrast between bright and somber surfaces. A half-naked man is lit by a bright light from the side. He is recognisable as Christ from the wounds in his hands. The man on the left is one of his disciples, Thomas. Christ had died shortly before this scene and had risen again from the dead. Not everyone believed in this miracle and Thomas was one of these until persuaded by his own eyes and hands that Christ's wounds were real. This is the moment Ter Brugghen has depicted. Curious people crowd around the two main characters. They are standing extremely close to Christ. The man on the right has even put on his pince-nez.This work is currently at the Rijksuseum in Amsterdam. Hendrick ter Brugghen was a leading Dutch follower of the Italian Michelangelo Caravaggio. He was born in about 1588 and at an early age moved with his family to Utrecht. He was in Rome in 1604 where he was heavily influenced by Caravaggio asd well as Carracci, Domenichino and Reni. He favored half-length figures and strong contrasts between light and dark surfaces. Though he died early in 1629 at the age of 41, his influence was widespread in the next generation of Dutch Masters.