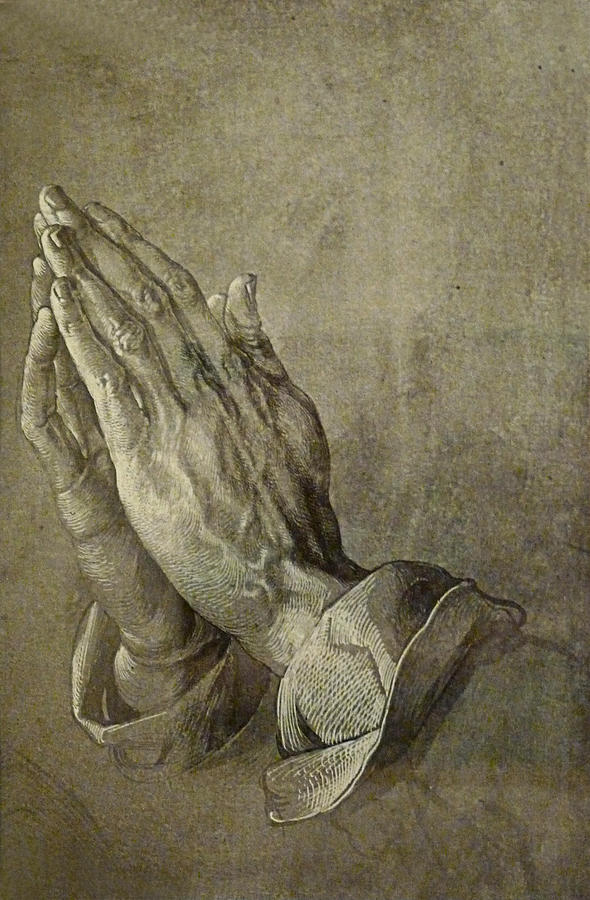 This is a reproduction of Belende Hande, or Praying Hands by Albrecht Durer of about 1508. This pen and ink drawing shows two male hands praying palm to palm. It was a sketched for an image planned to be within the center panel of the triptych of the Heller altar. It was one of eighteen sketches made for the altar and it came to public recognition in its Viennese exhibition in 1871. It is housed in the Albertina Museum in Vienna.

Durer was born in Nurmeburg on May 21, 1471, the son of Albrecht Durer the Elder, a goldsmith of Hungarian extraction. His maternall grandfather was the most successful publisher in Germany. Durer became apprenticed in drawing to Michael Wolgemut when he was fifteen. After four years he completed his apprenticeship and moved probably to Breisach and then to Comar and Strasbourg. He returned to Nuremberg to marry in 1494. He went alone to Italy three months after his marriage but returned the next year to open his own workshop in Nuremberg. His reputation spread and in 1512 is major patron became the emperor Maximilian I. By this time his reputation was international and he was in communication with Raphael, Belini and Da Vinci. He was reknown for his engravings and paintings, watercolors and books. He introduced Classical motifs into the art of Northern Europe and therefore became one of the most important influences on the Northern Renaissance. He died on April 6, 1528 in Nuremberg.